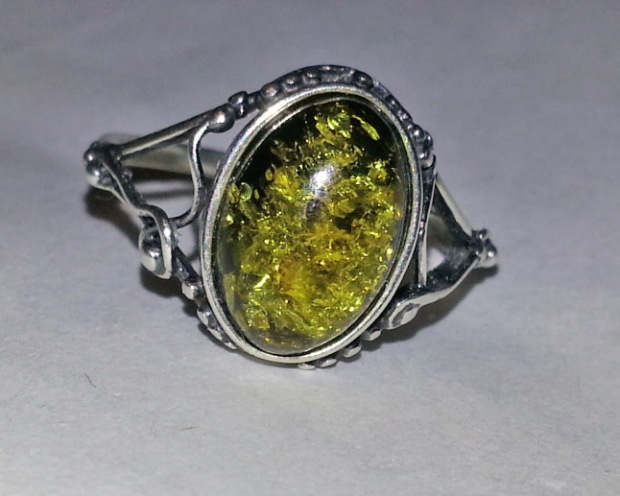 Green amber ring owned by Stephanie. It has nothing to do with this article. Photo by Stephanie Reed

David highly recommends this article on green amber from Gems & Gemology, 2009. Here is the abstract.

Abstract: A peridot-like bright greenish yellow to green gem material called “green amber” has recently appeared in the gem market. It is produced by treating natural resin (amber or copal) with heat and pressure in two stages in an autoclave. Differences in molecular structure between untreated amber and copal as compared to treated “green amber” were studied by FTIR and 13C NMR spectroscopy, using powdered samples. Regardless of the starting material, the FTIR spectrum of “green amber” showed an amber pattern but with a characteristic small absorption feature at 820 cm-1. Solid-state 13C NMR spectroscopy of the treated material indicated a significantly lower volatile component than in the untreated natural resin, evidence that the treatment can actually “artificially age” copal. A new absorption observed near 179 ppm in the NMR spectra of all the treated samples also separated them from their natural-color counterparts.