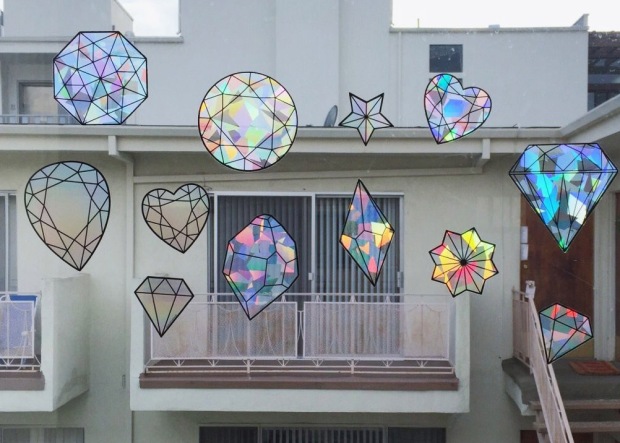 Gem Stickers on a window on an overcast day. Photo from Rainbowsymphonystore.com

Would you like to have rainbows in your home? These window clings look like clear plastic stickers in the shapes of cut gems, but they also contain diffraction gratings so that they will turn light from the Sun into shiny beautiful rainbows.

What your home will look like after installation of the rainbow gem window clings. Results may vary. Photo from Rainbowsymphonystore.com

If you are interested, buy them from the Rainbow Symphony store. I am not affiliated with Rainbow Symphony and I won’t make any money if you buy these. I saw these when I was purchasing ISO compliant eclipse glasses and thought of the club.

Labradorite has become a popular gemstone because of the unique iridescent play of color that many specimens exhibit.  Labradorite is a feldspar mineral of the plagioclase series that is most often found in mafic igneous rocks such as basalt, gabbro and norite.  Some specimens of labradorite exhibit a Schiller effect, which is a strong play of iridescent blue, green, red, orange, and yellow colors as shown in the photographs above. The Schiller effect is also seen in fire agate and mother of pearl. Labradorite is so well known for these spectacular displays of color that the phenomenon is known as “labradorescence.” Specimens with the highest quality labradorescence are often selected for use as gemstones. Labradorescence is not a display of colors reflected from the surface of a specimen. Instead, light enters the stone, strikes a twinning surface within the stone, and reflects from it. The color seen by the observer is the color of light reflected from that twinning surface. Different twinning surfaces within the stone reflect different colors of light. Light reflecting from different twinning surfaces in various parts of the stone can give the stone a multi-colored appearance.

In the fall of 2015, a 1,109 carat white diamond was found in the Lucara mine in South Africa. The diamond is called the Lesedi La Rona, which means “Our Light” in Setswana. On Wednesday, June 29, 2016 it will go up for public auction at Sotheby’s in London. Usually, precious stones like these are sold secretly by sealed bids and kept anonymous, so this Sotheby’s auction is unusual. This is the first time that such a large diamond has been on sale publicly.

The Lesedi La Rona is a type IIA diamond, which is very rare and is the most chemically pure type of diamond. Other famous IIA diamonds include the Koh-i-Noor and the Cullinan, which is 3,106 carats and is the biggest diamond ever found. The Cullinan was cut into 9 different stones and the pieces are now owned by various monarchs. Sotheby’s says that “whoever buys the Lucara stone will pay Sotheby’s a 12 percent fee, known as the buyer’s premium, on the hammer price for anything over the first $3 million, and a higher percentage of the first $3 million.” Whoever buys the stone will then have to decide if they want to have it cut. What a hard decision! What would you do?

The whole article is here: http://www.nytimes.com/2016/06/28/business/worlds-largest-uncut-diamond-heads-to-auction-a-break-with-tradition.html

UPDATE: It turns out nobody bought the diamond because the bids failed to meet the minimum reserve price. The reserve price was secret (just like at eBay) but it must have been more than £45 million ($61 million) because that was the highest bid. Maybe it will go on sale again later. Source: http://www.bbc.com/news/uk-england-london-36660076 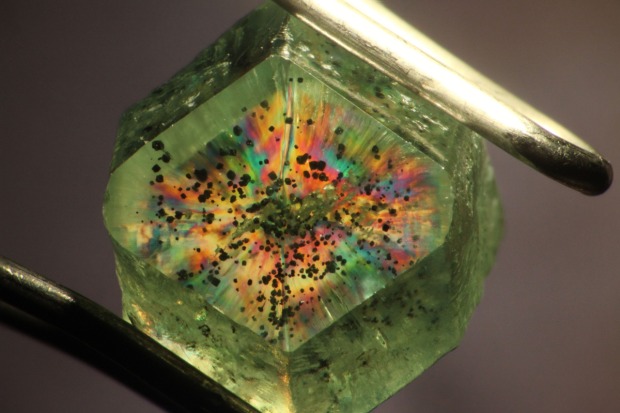 Since it’s January, it’s a good time to read about this garnet originally posted by Chemistry in Pictures.

“This gemstone isn’t pure andradite garnet [Ca₃Fe₂(SiO₄)₃], but its flaws produce its mesmerizing colors. Some gemologists think that this rainbow explosion arises because the garnet’s different elements aren’t regularly spaced from the core of the gemstone to the outside. For example, in some regions, aluminum atoms might have worked their way into the structure and replaced the iron atoms. These irregularities create mismatched sheets of atoms that then bend and stretch. This makes the stone birefringent, meaning that light travels through it at two different speeds. Under cross-polarized lighting conditions, rays of light that enter get misaligned by the time they exit, so they then interfere with each other and highlight some colors in certain spots, producing the spectrum seen here. The black flecks are tiny pieces of magnetite that were enveloped by the crystal as it grew.”

My favorite thing at the Sutton Museum was this collection of cabochons made by George Springer. There are about 200 in this case, and there were three of these cases full of cabochons. They are all labeled so you can spend a long time just looking at them and reading what they are. 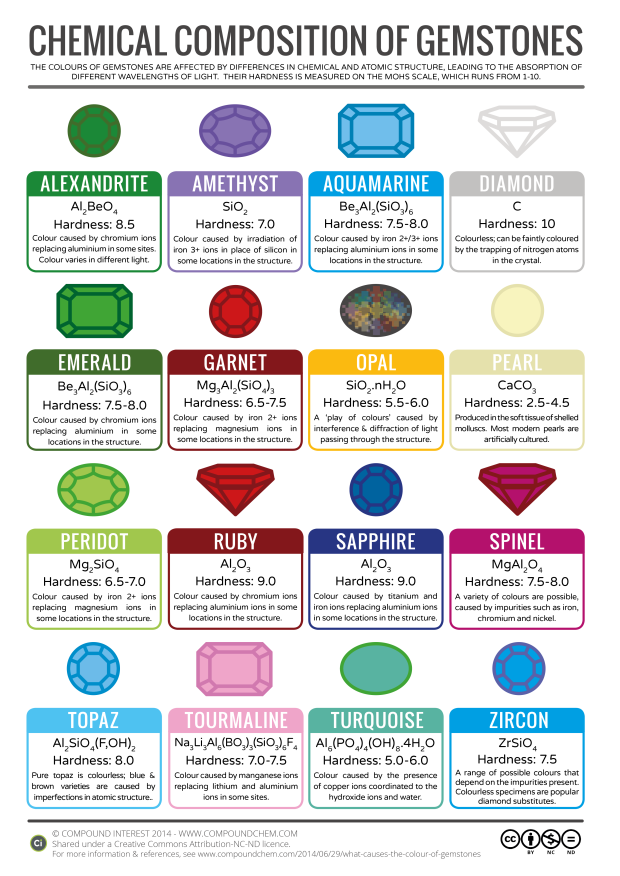 Here’s a neat infographic from Compound Interest (one of my favorite websites) that describes 16 different gemstones and why they have different colors. It also includes their chemical formulas and hardness on the Mohs scale.

Many gemstones would be colorless or a different color if not for the presence of small amounts of transition metals such as chromium or titanium. For example, you can see that aquamarine and emerald both have the same chemical formula Be3Al2(SiO3)6, but emeralds are green because of chromium ions replacing some of the aluminum ions and aquamarines are blue because of iron 2+ or 3+ ions replacing some of the aluminum ions. Click through to read the whole article, because there are many other ways that gems and minerals get their colors!

Frederick, one of our members who is into gem cutting, brought in these rough sapphires from Montana at our last meeting. Check out his website http://missouririversapphire.co/ to see how beautiful they look when they are cut.

Members can email pictures of their work, rocks, cabs, slabs or finds, etc, or post them  on facebook.  facebook.com/showmerockhounds