It wasn’t really a “meeting” when we gathered at the Westport Flea Market on December 15th, but it was a darn good party. About 20 of us took over tables and chairs in the area by the pinball machines, but this year no one was playing the machines, so all the noise was ours. After socializing and food, we got down to serious gift opening (and theft). Steve and Charline Dumortier, making it clear who exactly has foresight in this group, brought a big trash bag in which to put discarded wrapping and ribbon.

The most coveted item was actually two items: a rock of clear quartz crystal with one especially nice terminal, paired with a stand that beamed changing colors of light through the quartz.  That was originally obtained by Anthony Bertrand, who lost it to Charley Maazouz, who lost it to Ginny Farney (“You know there’s something fundamentally wrong with that!”), who lost it to Sharon Penner.

As for everyone else, we didn’t do so badly either:  Trent Stigall wound up with a whole mini-collection that included barite, dalmatian jasper, a mosasaur tooth, and a thunder egg.  Donn and Sylvia Crilly (who didn’t attend in person, but sent a gift through Valerie J. Meyers, who then picked up a gift for them) got two of Charlie Hedge’s wonderful kaleidoscapes, mounted on both sides of a small board.

Dan Snow got a small display case for several specimens. Pam Stigall got a great chunky galena specimen, Anthony got calcite specimens from Lake Stockton, Missouri, and Connie Snow received a black cryptocrystalline quartz “sacred stone” and the book “Love is in the Earth,” by Melody.

Cele Wood opened a box of bead strings and said, smiling, “The gift that keeps on giving.” (“I see projects in your future!” Charley called.) Charline got a National Geographic pocket guide to rocks and minerals. Steve was clearly meant to get a box no matter what: Having lost a beautiful wooden box with an inoceramus fossil on the lid to Charley, he then obtained a carved stone box with marbles inside.

Stuart Traxler got a specimen of smooth script-stone jasper from India; Brennen Barnes got a polished red-lace agate from Mexico; Charlie Hedges got a digital picture frame; and Finny wound up with a lovely wire-wrapped moss-agate pendant on a leather thong. Arienne Barnes got a rock with a lot of fossilized turritella, and Valerie got the book “Roadside Geology of Missouri” by Charles Spencer (and hey! She’s taking a road trip in a couple of months!).

If I’ve accidentally left out your attendance (hello, Carol Fergason) or your gift (hello, bag of beautifully colored rocks including calcite and sodalite), please forgive me.

Dan announced that he was planning to have another cabbing session January 20th at his place. With that, and a lot of looking over other people’s gifts, the party broke up. Dan and Connie Snow were kind enough to take both video and still pictures of the party. They can be found on the group’s Facebook page, from which the following photos are remorselessly stolen. 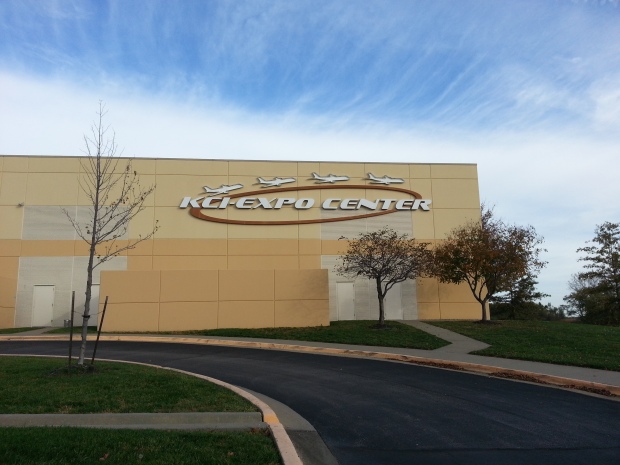 The view from behind the Association booth. 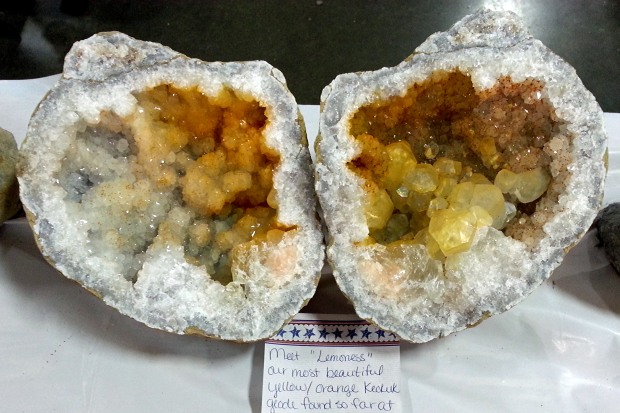 This yellow geode is from Keokuk in St. Francisville. They call it “Lemoness”.

This huge crinoid (Scyphocrinites elegans) fossil is from Morocco.

There were also fossils from Kansas available.

Plenty of beads for sale at the show.

Fossil Brittle Star from Morocco, sold by Schooler’s Minerals. Fun fact: a brittle star is from the class Ophiurida and starfish are from the class Asteroidea, so they are not really related to starfish at all. 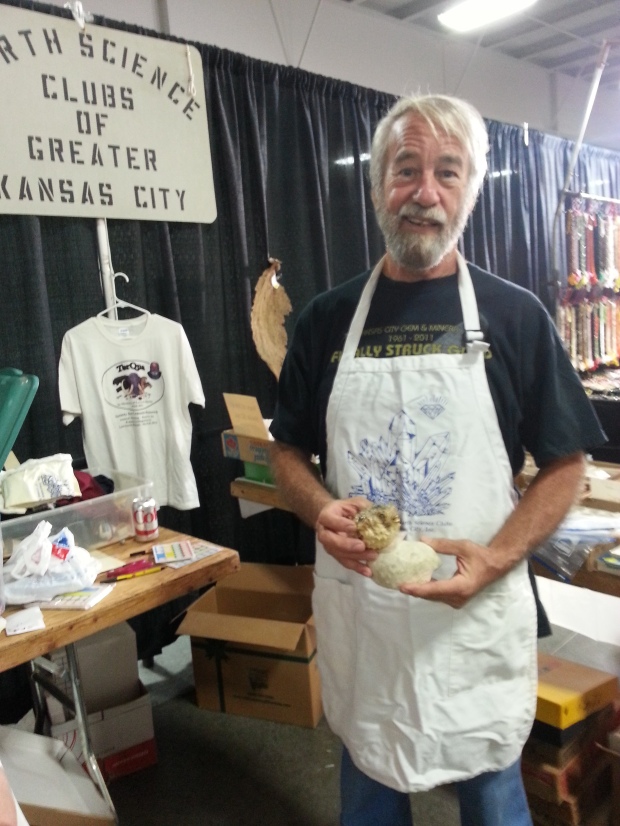 Bob models an official Association apron and holds a pufferfish.

The preserved pufferfish close up. It is hollow and light as a feather. I don’t think anyone bought it so it will be for sale again in March.

Some of the mineral, fossil, and jewelry-related books we had for sale this year.

Carved skulls made of semi-precious minerals. 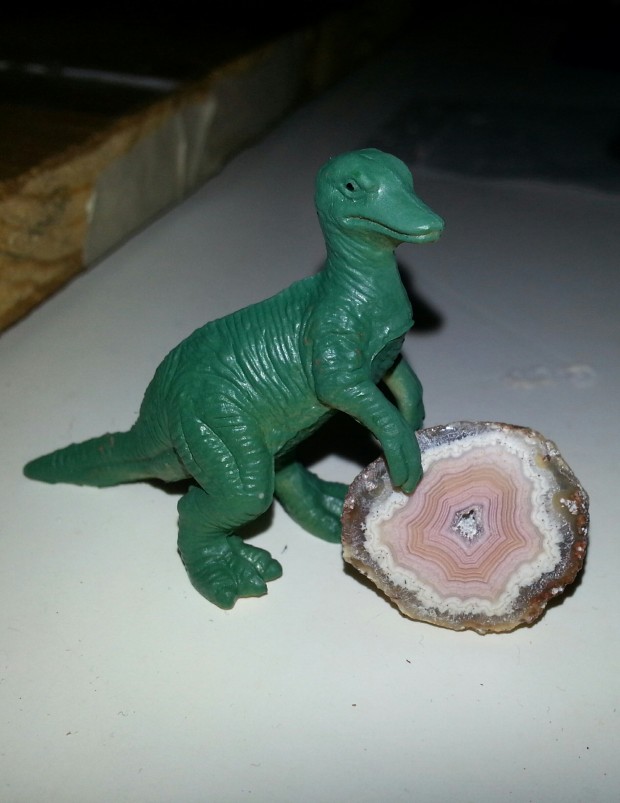 Is this a giant dinosaur showing off a giant agate, or a very small dinosaur with a tiny agate?

Martin selling pottery that he made

Everything is packed up into our big blue cube until the next show.

This book is great! It has beautiful pictures of the fossils that can be found in Kansas City and clear stratographic sections explaining the geology of the area. It also shows locations for picking up the fossils. Everything you might wish to know about Kansas City is in this book. Well worth the money and you can ONLY get it at UMKC (Amazon doesn’t have it). We purchased one when we visited the Sutton Museum.

We had fun selling and buying specimens at the gem show. If you missed it, here are some of the things you can expect to find at a show.

An overview of the whole show. Photo by Stephanie Reed 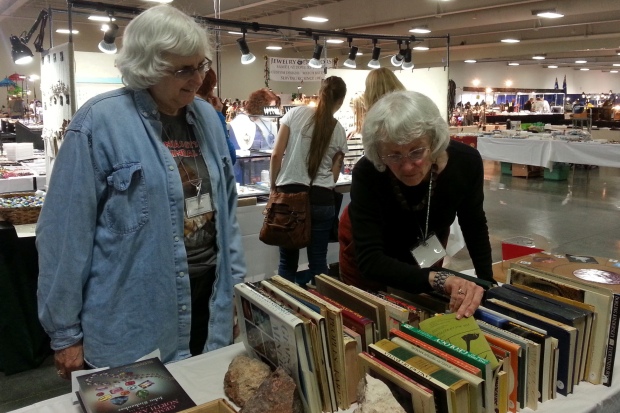 This year we sold books about rocks and where to find them, including the highly desired Gemstones of North America by John Sinkankas.

President Martin and Webmistress Stephanie looking at an aquamarine. Photo by David Reed

This jar of tumbled chips of Lake Superior agates was part of a kit for making a gem tree, sold by the Show-Me Rockhounds. Photo by Stephanie Reed

Polished spheres made of minerals from Dave’s Rocks and Carvings (Hamburg, MI). I see rose quartz, tiger’s eye, sodalite, and snowflake obsidian. Can you name all the minerals?

Gem shows always have lots of jewelry for sale, usually organized by mineral. This is an entire box full of rings made with blue larimar sold by Manichia LLC (Kansas City, MO). Blue larimar is a type of volcanic pectolite found in the Dominican Republic.

Glass beads for sale at Park Design (St. Joseph, MO). You can even watch the beads being made. They can also be found at the Three Trails Trading Post in Independence, MO.