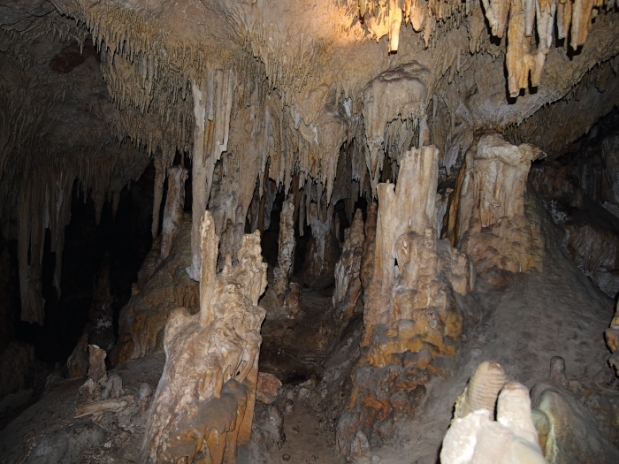 Stalactites and stalagmites form in caves when water that contains dissolved minerals (such as calcium carbonate) drips from the ceiling. Scientists can analyze the 18O/16O ratios (isotopes of oxygen) in the stalactites and see how the temperature changed as they were formed. A team led by Andy Baker, Gurinder Nagra, and Pauline C. Treble of the University of New South Wales, Australia discovered that Yonderup Cave had a lot more 18O than they expected. Since having more 18O is associated with higher temperatures at the time of formation[1], it could have been interpreded as one of the largest climate changes in the last 2 million years.

But, there was a wildfire in 2005 and a large tree died right on top of the cave. Baker’s team believes that this is what actually caused the increased 18O concentration. This is important for anybody else trying to use these oxygen isotopes to determine ancient temperatures, because if they get a very warm result it might have been caused by a forest fire instead.

[1]It’s a little more complicated than that. Read the whole article here: http://cen.acs.org/articles/94/i30/Cave-dripwater-contain-fire-evidence.html and check Baker’s website for more interesting stuff about how he researches caves to learn about past climates.

Any change in meeting times will be listed on this website.