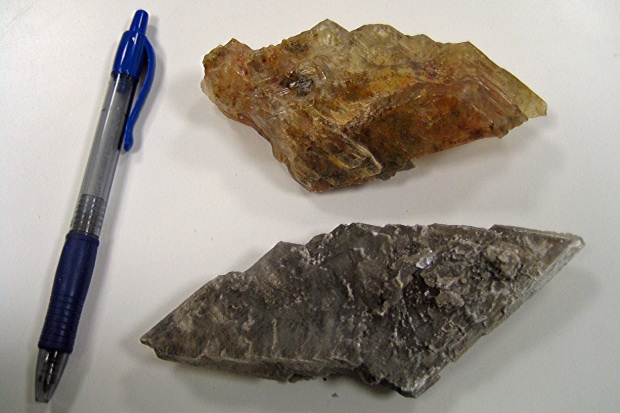 Selenite is a type of gypsum that has a flat reflective surface, usually gray, clear, white, or amber. Red is an unusual color for selenite, but they do exist. It is very soft and can be scratched by a fingernail (2 on the Mohs scale). At our February meeting, two of the door prizes were these selenite crystals found by President David Reed. The amber one is from Lake Kanopolis in Kansas. The gray one is from Lake Wilson, which is also in Kansas. David went to Lake Wilson and put a small crystal in the mud. He returned 3 years later and found the large gray crystal.

One time David and Stephanie went to Kansas and found several selenite crystals somewhere near the dam at Lake Wilson. They were gray like this one pictured, but much smaller. On the April field trip to Marquette, some club members also found selenite crystals.