Agates are a variegated type of chalcedony (a type of quartz) that are made of microcrystalline silicon dioxide crystals formed in distinct bands. The name comes from the Achetes River in Sicily, where agates were first found. Agates are often cut into slabs, or agate pebbles are polished in rock tumblers or made into pretty striped beads. Being a semi-precious gemstone, they polish well and can be made into a lot of things. 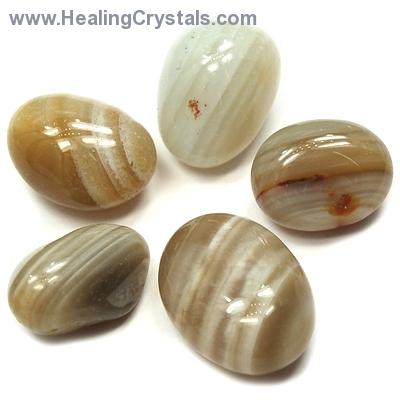 Banded agate pebbles that have been tumbled. Photo from: http://www.healingcrystals.com/Tumbled_Banded_Agate_-_Tumbled_Stones.html

Banded agates are the traditional, “default” type of agate that you always see in museum gift shops or made into coasters and suncatchers. The colored bands are very distinctive. Since agates are porous, it is very easy to dye them, so you will frequently see agates dyed unnatural colors like bright blue, violet, or hot pink. Not that there’s anything wrong with that. Decide for yourself whether you are willing to buy an agate if it has been dyed, and then be aware that the natural colors of agate are black, white, yellow, gray, brown, red, pale blue, and pale pink. One final tip: If you want agate slab coasters, you’ll pay way too much if you buy them from a home decorating store like in the link. Just get some agate slabs at an upcoming gem show and glue some cork on the back. 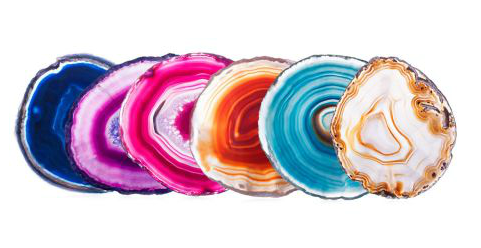 Banded agates that have been made into cute coasters.  The orange one and the brown one could be natural but the others are definitely dyed. Photo from: http://www.michaelcfina.com/tableware/bar-accessories/rablabs-pedra-coasters-AMRABLPECO.html

Any change in meeting times will be listed on this website.